DEF Jam co-founder Russell Simmons is the first hip-hop icon to receive his own stamp, via a new campaign with the People for the Ethical Treatment of Animals (Peta). Russell Simmons’ mug will appear on one of 20 stamps dedicated to the most famous vegetarians of all time, in an effort to stamp out animal abuse.
Other celebrities that are featured in Peta’s latest campaign include Woody Harrelson, Cesar Chevez, Paul McCartney, Ellen DeGeneres and others.
During the campaign, the celebrities will offer tips on healthy living, in addition to doling out wisdom on the importance of being a vegetarian.

Hip Hop originated in New York during the 1970s, Russell Simmons (GlobalGrind.com) along with wealthy punk rocker Rick Rubin were the first pioneers of the hip hop music genre to create a record label empire; Def Jam records.  Def Jam introduced the world to legendary artists such as RUN DMC, LL Cool J and the Beastie Boys in the 1980s which led to immediate success, turning Def Jam Records into the biggest record label in Hip Hop during this time period.  In today’s world Russell Simmons is more interested in yoga and occupying Wall Street rather than breaking the next big artist.  Therefore the door has opened for new moguls to takeover the throne and create empires for the 2012 generation.   GWOP Magazine staff has put together a list of the top Hip Hop/Rap Record labels for 2012.  Nas said ‘Hip Hop was dead in 2006’, well these labels are destined to prove that the music genre has only suffered a heart attack and there is no need to panic.  Checkout the full list after the jump.

END_OF_DOCUMENT_TOKEN_TO_BE_REPLACED

Def Jam co-founder Russell Simmons is considered Hip Hop’s first mogul. With a top record label, fashion line, reality TV shows and websites at various points in his career, the Queens, New York native has evolved throughout the last 30 years. One of Simmons’ symbols of wealth sold this week, for an eight-figure sum.

HomesOfTheRich.net reported that Russell and ex-wife Kimora Lee Simmons have sold their New Jersey mansion for $10 million. They first listed their former living quarters in 2007 for $23.7 million, before reducing the price.

The 35,000 square-foot mansion includes a 50-seat home theater, among many other amenities. The buyer’s name has been kept private.

GWOP MAGAZINE STAFF has put together a list of Hip Hops CASH GWOP Kingz! These Hip Hop cash cows contribute more than lyricism to hip hop culture.  These 5 individuals get GWOP! Entrepreneurs who create brand names.  “Relax and take Notes”  Get off the Block and Go Get GWOP! 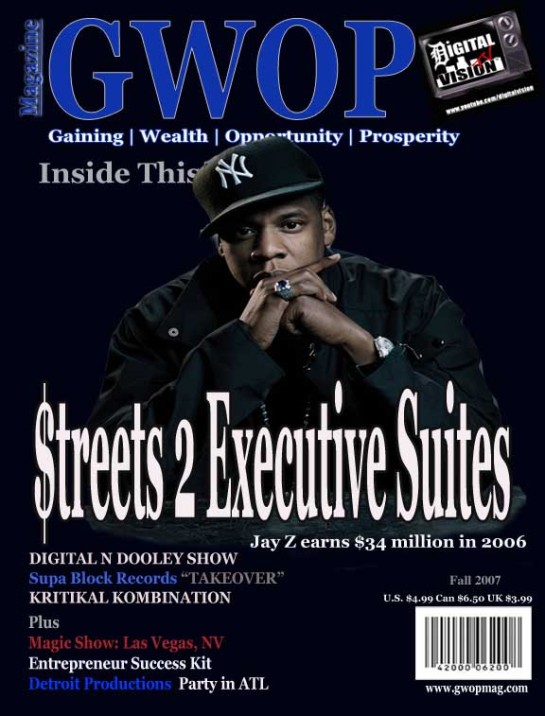