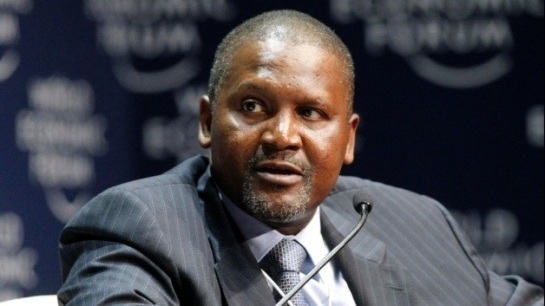 Nigerian billionaire and Africa’s richest man Aliko Dangote has become the African entrepreneur to lay claim to a $20 billion fortune as the stock value of his largest holding, Dangote Cement, leaped just about three-fourths since March when Forbes released its annual ranking of the world’s richest people.
Aliko Dangote’s 93% stake in the cement company is now worth $19.5 billion. Add this to his controlling stakes in other publicly-listed companies like Dangote Sugar and National Salt Company of Nigeria and his significant shareholdings in other blue-chips like Zenith Bank, UBA Group and Dangote Flour; his extensive real estate portfolio, jets, yachts and current cash position, which includes more than $300 million in recently awarded Dangote Cement dividends, Dangote is now worth more than $20 billion.

The Nigerian billionaire is now among the top 25 richest people in the world, richer than Russia’s richest man, Alisher Usmanov, richer than India’s Lakshmi Mittal and running neck and neck with India’s Mukesh Ambani. He is catching up to such Americans as Google’s billionaire founders Larry Page and Sergey Brin.
Source