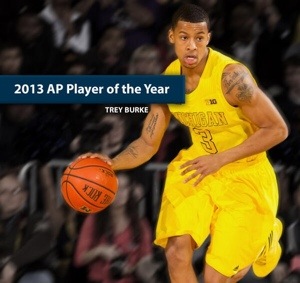 Congratulations to Michigan’s Trey Burke for winning the AP Player Of The Year Award. Burke is now the second player in Michigan history to win this award, the other was Cazzie Russell in 1966.

Burke averaged 19.2 ppg, 3.1 rpg, and 6.7 apg all while shooting 40% from three-point land. Burke has also won the Big Ten player of the year award and is now the favorite to win the Naismith Award. Michigan will take on Syracuse in the Final Four of the NCAA Tournament this Saturday night.