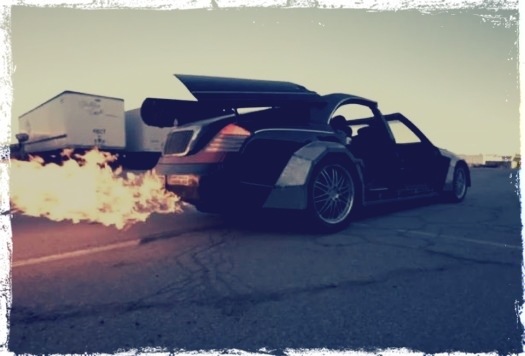 Spotted: Huffington Post
It was a glorious day when the music video for “Otis,” the first single from super-collaboration “Watch the Throne” was released. Yet in a music video starring hip-hop’s biggest giants Jay-Z and Kanye West and directed by indie-darling Spike Jonze… you wouldn’t expect a car to steal the show, but the deconstructed Maybach stole our hearts.

The $350,000 vehicle was part Burning Man part bling… a perfect visual for the broken-down American dream aesthetic of the video. According to GalleristNY the car can now be yours, if you are willing to, as Jay says, be spendin’ cheese. The wheels will sell at Phillips du Pury auction house on March 8, with proceeds going to Save the Children. It is expected to sell at around $100,000.
END_OF_DOCUMENT_TOKEN_TO_BE_REPLACED

We got a question for Dr. Dre: When is Detox going to drop?