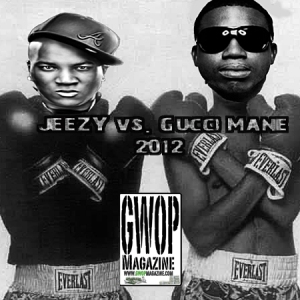 Jeezy & Gucci been beefing since ’04 when Jeezy allegedly sent his goons to rob Gucci for his necklace at the time.  Gucci defended himself by shooting and killing Jeezy’s associate on the scene. Recently Gucci added a lil gasoline to the fire in a Breakfast Club interview (below) where he state “He will never respect Jeezy”   Jeezy responded 2 days later (video below) saying “Gucci is Retarded”  The Atlanta Trap rappers have been feuding for almost a decade now.  Let’s pray and hope this trap feud doesn’t turn into a recap of 1996-1997 the years 2pac and Biggie were killed respectively.  Stop The Violence.  Keep the Peace.  Checkout the videos after the jump.

Watch video after the jump of Gucci w/ Breakfast Club:

Speaks On Trap God Mixtape Coming Out On 10/17, BET Hip-Hop Awards, Current Young Jeezy Situation, And Also On How He Feels About The Industry.